Today, I bring to you the wonderful card drafting game called 7 Wonders. This game has won a mess of awards, and most of them are plastered around the sides of the box. The premise of the game is quite simple – everyone picks or is randomly assigned a wonder, and then cards are drafted in 3 different rounds in an attempt to finish with the most points.

The game is broken into three different ages. The first age you will be drafting the building blocks of your wonder. Age I consists mainly of resource cards and some military, science, economy and civic cards. You’ll mostly want to focus on setting up your resource pool with brown and gray cards that fill the gaps of the players to your left and right (since you can trade money with them for temporary use of their resources). Any card you draft, you will keep for the entirety of the game, so building up your resource reserves is key here. Some economy cards (yellow) allow you to purchase resources from your neighbors at a discounted cost.

Age II has more resource cards, but this time they are more efficient, providing two of one type of resource. You’ll also find more of the gray resources here as well such as glass, silk, and paper. Science and civic cards will appear more frequently in this age too providing straight up victory points (through civics), or getting your sets started for science points. You better make sure you have access to at least one of each resource by the end of Age II, because…

Age III doesn’t contain any resource cards. This is where you are fine tuning your wonder/civilization and developing guilds which will score you points based on yours and your opponent’s actions throughout the course of the game. During each age, you will also have the ability to construct stages of your wonder for additional bonuses. These stages are entirely optional though, and you can very well win the game without developing any stage of your wonder.

This game plays 2 – 7 players. There is an alternate rule set for a 2 player game, and I have never tried it myself. I would recommend just playing 7 Wonders Duel if it’s only going to be two players. The interesting part of this game is that even though there may be say – 5 or 6 players – you only interact with the players to your immediate right and left. You will never interact with any of the other 2 or 3 players, but everyone’s scores are compared at game end. For example, you will never wage combat against, or be able to buy resources from, the players whom aren’t sitting right next to you.

There have been several expansions that have come out for this game introducing different card types such as leaders and cities. Some of the cards from these expansions do result in interaction across the table though. I’ll cover these expansions in a future blog post, as this is just focused on the base game.

My Thoughts: This is one of my all time favorites. It deserves every award it was presented with. It’s super easy to learn and it comes with a handy reference guide that new players can look at to better understand what specific cards do. It takes the card drafting mechanic and makes your picks have an instant effect, rather than waiting until you have a complete deck or set. Because of that, the state of the game is constantly changing based on which resources you have access to, and which cards you can likely see based on what the other players are drafting.

My personal rating for this game is 9/10. This game comes with me to game night more often than others because it’s always different. No two games are ever the same, even if you play the same wonder board. Also, each board is double sided, which just increases the uniqueness of each game. While it has a decent amount of strategy to it, it’s also simple enough to pick up and understand by the end of the first play-through, and games typically can be played within 30 – 40 minutes. 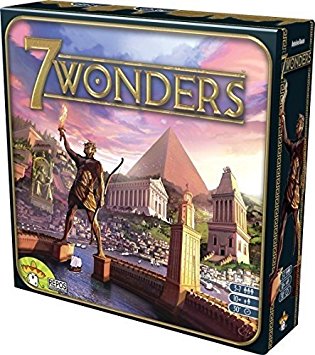