Hello friends! Today we’re going to take a step away from the civilization building games, and enter the Stone Age. Yes, today’s game review is for Stone Age. Worker Placement is the main mechanic of this game, and it does it very well.

Stone age is a game for 2 – 4 players, although it’s best experienced with 4 players, as there are alternate rules for 2 and 3 player games. Each round, players will take turns placing workers in various locations on the board. In order to gain resources, players can send workers to the clay pit, mountains, river, or forest in hopes of bringing back a plentiful bounty of goods. However, the spaces here are limited, so it’s a first come – first serve basis in these areas. The hunting grounds can be occupied by any number of workers though. You also have spaces in the village that can be occupied in order to increase farming output, make tools for dice manipulation, or increase the amount of workers you have. Be careful though! At the end of each round, you’ll need to provide food for each worker you own. 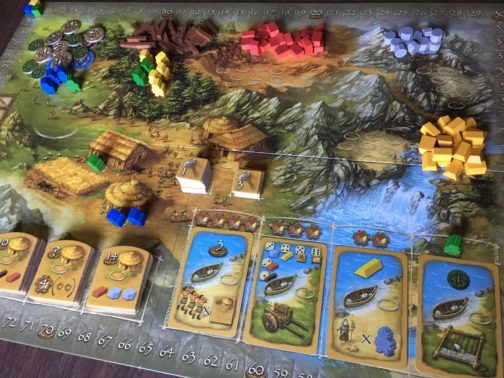 So why gather materials? Well, you’ll need materials to purchase building tiles and pay for development cards – both which provide points, and points are what you’ll need to win this game. Games are often decided by who has the most development cards. A player could be quite far behind, but at the end of the game when development cards are counted, they can jump ahead and win by a landslide if no one else was focusing on them.

My Thoughts: I would give this game an 8.5/10. I very much enjoy this game, but as I said before – even though it’s 2 -4 players, it’s really best played with four. 3 players does provide a good balance, but there are still restrictions. This is a great game to introduce people to the worker placement mechanic though as it isn’t overly complicated at its core. The art is really nice on the boards and the quality of the components are nice as well. New players to the game are also usually impressed with the leather dice cup, and comment on it. 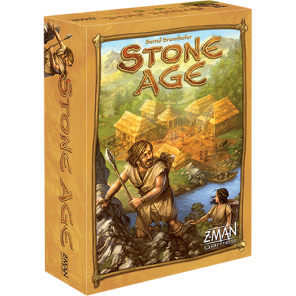