Have you ever thought to yourself, “Man, I really wish I could take the original trilogy of Star Wars and do it a little differently.”? Or perhaps you’ve said it to someone else. Maybe you want it to be relatively the same, but would rather have played it out yourself. But perhaps all you really want is just Star Wars in a box. Well Star Wars Rebellion by the wonderful people at Fantasy Flight Games lets you do just that by giving you the entire original trilogy in a box.

If you want to experience an entire galactic war and movie series within the confines of a box, then this game is for you. Clear your schedule though, because this won’t be a quick sit-down – it’s an epic game of epic proportions. To date, this is the most complex game I have reviewed as well. A lot goes on in this game, which is nice because it provides endless entertainment the entire play through. There are always decisions that need to be made, things changing, or battles being fought.

This game plays 2 – 4 players, but is best played with just 2. One player controlling the Imperials/Empire, and the other player controlling the Rebels. In the cases of 3 or 4 players, 2 players will split the responsibilities of a faction, where one player will control the Navy (fleets, space combat, etc.), and the other player will control the Ground combat, Generals, and ‘politics’. Each round is split up into 3 phases with a handy guide on the back of the rule book to reference.

Players will begin each round with the Assignment Phase, where they will assign leaders to mission cards that are kept face down, beginning with the Rebels. These mission cards have multiple different uses, some missions are repeatable, while others are a one time use. Certain missions will be used to capture or free a leader, produce units or ships, or mess with the opponent in one way or another.

Once the Imperial player chooses their missions, players move to the Command Phase, where they take turns revealing missions (in the order they choose), or activating systems in order to move units. Players can attempt to block missions of the opposing side by sending non-assigned leaders to face off and try to block the mission attempt. Once a leader is used, it goes to the board in order to carry out a mission, block a mission, or move units. Leaders on the board cannot be used again that round. 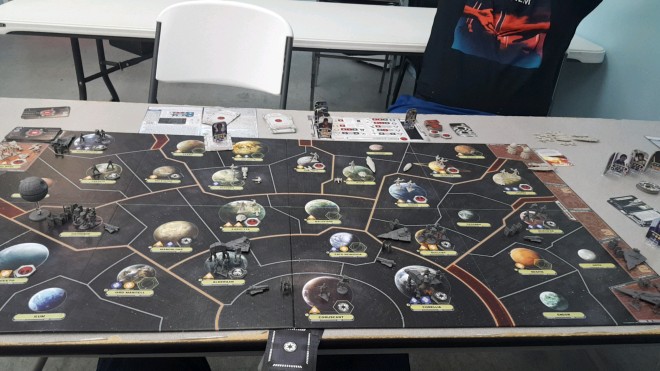 Once all players are finished revealing missions and/or moving units, the round moves to the Refresh phase. During this phase, players will retrieve their leaders from the board for use in the following round. They will also draw new mission cards, the Imperial player will launch a probe droid in order to attempt to locate the rebel base, and the Rebel player will draw an objective card. The time marker is then moved one space along the track, and available units are deployed.

If the Imperial player finds and destroys the rebel base, they win. If the Rebel player can gain enough reputation by completing objectives to where the time marker and the Rebel reputation marker are on the same spot, the Rebels win the game.

My Thoughts: Man, do I love this game! I give it a 9.5/10, and the only reason I won’t score it a 10/10 is because it just takes a long time to play it, so it’s not something I’ll always suggest playing. But with the right person and with the available time, I would rather play this game over anything else. I’m a huge Star Wars fan, and this is absolutely Star Wars in a box. The action is constant, the game gets super tense toward the end – when the base has been discovered by the Imperials, and there are two spots between the time marker and the Rebel’s reputation marker… very tense. And you just get so much in the box; more than 150 miniatures, a massive amount of cards, and a two piece game board that includes 32 iconic systems. 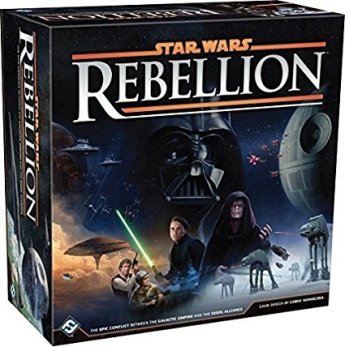