When I was purchasing this game yesterday, my friend asked what it was about.

I said, “You make stained glass windows out of dice! It looks really good!”

He looked at me funny and replied, “Oh yeah… sounds great.”

“Hey, you said the same thing about the tree game (Photosynthesis) and you really liked that one.”

Unfortunately, he wasn’t able to play that night, but I did get some games in with other people, and I even threw down some solo play. All of which will be covered in this review of Sagrada.

Pretty, aint it? However, games can’t just be good looking and get away with it. They need to be well oiled machines with mechanics that flow together and work well. Everything needs to come together into a cohesive package, and result in game after game of pure fun and entertainment. That my friends, is what Sagrada does exceptionally well, 90% of the time.

In Sagrada, you are competing with other ‘artists’ to make the most fantastic stained glass window. There are restrictions you must abide by, and everyone has their own individual restrictions as well. No two players will ever have a window that looks the same. Everyone begins the game with a secret Private Objective Card. This card has one of five different colors on it – again, no two cards are the same. Each player is then given two of the 12 available Window Pattern Cards, which are also double sided. These cards have varying difficulties which provide players with Favor Tokens that can be used to utilize community Tool Cards. Each player chooses one of the window patterns, and slides it into the bottom of their Player Board, which happens to be a very nice double- layered cardboard, stained glass window. 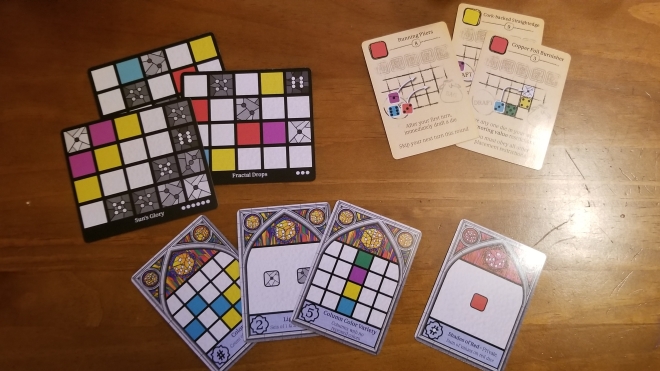 Three random Tools Cards, and three random Public Objective Cards, are then placed in the center of the table. Each Public Objective card has a specific pattern or set that must be matched in order to gain a set amount of victory points. Once set-up is complete, it’s time to get crafting!

Sagrada comes with a very nice cloth dice bag, and 90… yes – ninety colorful, translucent dice. Depending on the number of players, a starting player draws a set number of dice, and rolls them. Those are now the die results for the remainder of the round. The starting player chooses 1 die, and puts it in their window starting on any edge or corner spot. If there is a gray shaded die icon, the die placed there must have a result matching that icon. If it’s a solid color, then the die must match the color icon. If it’s blank – there are no restrictions. The next player than chooses a die, and follows the same procedure.

Players are also able to use tool cards by placing 1 favor token on it if it is empty, or 2 if someone has already used it. Choose wisely though – each unused favor token is worth an additional 1 VP at the end of the game. One the dice reach the last player, that player chooses his first die, and then immediately takes another turn. There are now a set of restrictions that must be followed carefully when placing more dice on your window board.

Players may also choose to not draft a die on their turn and either just use a tool card, or simply pass.

Play continues in this fashion for 10 rounds, and then points are totaled to see who crafted the best window using the objectives provided.

My Thoughts: This game definitely deserves all the praise it received when it was released. It’s no wonder it’s the Top 7th game on the list of abstract games on Board Game Geek. The rules are simple, I basically just told you how to play. The rule book is 2 1/2 pages with lots of pictures. But don’t let that fool you. You will be racking your brain on which dice to choose, where the best place for it is so you aren’t locking yourself up later, which tool card to use and when… this game is full of interesting choices to be made by the players. I can’t wait to get this game on the table agai — but wait… I said it’s great only 90% of the time – what about the other 10%? Hands down, this game is meant to be played by 2 – 4 players (5 – 6 with the expansion). However…. this game is listed for 1 – 4  players, and it does include a solo variant.  Because of that – I can’t just ignore that feature. I sat down and played a couple solo games, and lost by a landslide. I’m talking 60+ points as a target score, and only reaching 35. I won’t go into the details of how the solo variant works. It’s mostly the same, with a few … variations … but I don’t think it was play tested enough. I went online to see if maybe it was just me and I suck at solo play, but there were many others who were running into the same issues I were, with some people reporting only one win over 10 plays. I feel if they completely did away with the solo variant, and just marketed this game as a 2 – 4 player game, it would be damn near perfect. However, I can’t ignore a section of the game that was added in. With that said, I still give this game a solid 8.5 / 10. The replay value is very high with the different window patterns, and the fact that every game has a different scoring procedure based on the always random objective cards. I can see this being a game that I consistently bring to board game nights, or ask if company wants to give it a shot. It’s super approachable, and it’s a really beautiful game. 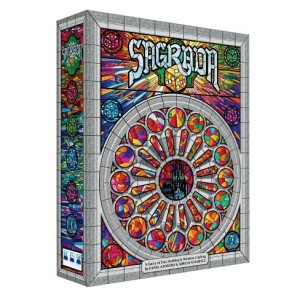